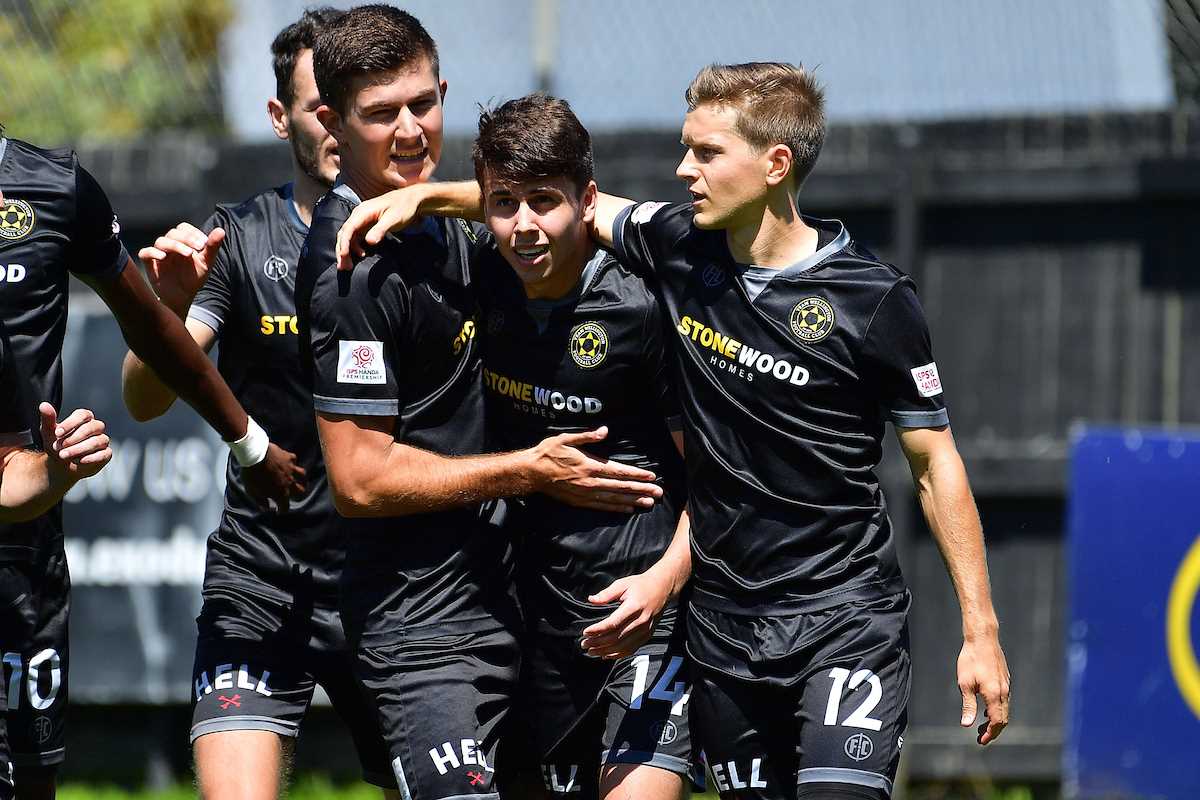 The identity of all four play-off participants has now been confirmed after Canterbury United joined Auckland City, Team Wellington and Eastern Suburbs in securing their berth after the latest bout of ISPS Handa Premiership action this weekend.

In the only game to take place on Saturday, one goal was all it took to bring an end to the play-off hopes of Tasman United, who have clung on doggedly to the coat-tails of the top four but were finally forced to let go with a 1-0 defeat to Auckland City.

With their regular home of Trafalgar Park undergoing pitch renovations, Tasman have taken to Saxton Field in recent weeks and the locals there witnessed their side push the minor premiership favourites all the way in a low-scoring but open encounter.

Youngster Callum McCowatt proved the match-winner for the Navy Blues, popping up five minutes before the break to supply a lead Auckland never relinquished. Aside from stamping out the play-off prospects of Tasman, the result was notable as it created a fresh piece of history. The clean sheet was Auckland’s sixth in a row, breaking a record set by Waitakere United in the 2007/08 season.

Remarkably, Ramon Tribulietx’s men have now gone 560 minutes without conceding a goal and they will look to take that form into the OFC Champions League, Group C of which they are set to host over a week from this Sunday at Trusts Arena.

Tribulietx felt his side could have won by more than a single goal but had plenty of praise for Tasman net-minder Corey Wilson.

“To be fair, their ‘keeper had a great game,” he said.

“He saved four or five great chances for us and that kept the game on the edge. At the end, they had a header from a set piece that could have been a goal but, outside of that, we defended the other set pieces very well, and the counters, so I’m happy with the performance.”

While disappointed to miss out on the top four, Tasman coach Davor Tavich said his youthful line-up could take confidence from their efforts against a side of Auckland’s class.

“There’s definitely a good future for this region after seeing how the boys performed today against the best team, in my opinion, in New Zealand,” he said.

Tasman’s failure to take anything from the game – coupled with a defeat for Waitakere United – meant some of the pressure was off fellow South Islanders Canterbury United, who could now take on Hamilton Wanderers the next evening safe in the knowledge that their play-off berth was already secure.

There was still plenty to play for though as Canterbury are in contention to earn a home semi-final by finishing in the top two while Wanderers are doing all they can to avoid the wooden spoon. Having been left to kick up their heels with the bye last weekend after notching their first victory of the season, the hosts were desperate to make it back-to-back wins in Hamilton but a hard-fought affair was settled in Canterbury’s favour by George King just before the hour.

King, once on the books of English Premier League giants Manchester City, is primarily a fullback but has been used in a more attacking role by Willy Gerdsen in recent times and got his name on the scoresheet for the second week running after rifling a sweetly-struck shot in off the underside of the crossbar.

Another South Island-based side was also able to celebrate as Southern United made light of the departure of Danny Furlong – arguably their most potent attacking weapon – by going on the rampage against the Wellington Phoenix Reserves. The 4-0 win was their biggest of the campaign by some margin and came courtesy of four different goal scorers as Alex Ridsdale, Danny Ledwith, Nick Treadwell and Andrew Ridden all found the net.

The damage was done in the first hour with Ridsdale opening the scoring after just 15 minutes before Ledwith and Treadwell struck either side of the break. A pleasing afternoon for coach Paul O’Reilly was wrapped up late on by Andrew Ridden as the ‘Wee Nix’ slumped to their ninth loss of the season.

“In fairness to the Phoenix, the game was probably much closer than a 4-0,” O’Reilly admitted. “We’re delighted to win because I think they’ve got lots of good young players, have a good structure and play an attractive style of football. The target was to try and break into the top six and today gets us back on track a bit but it’s crucial we follow it up.”

Phoenix midfielder Adam Parkhouse felt his side put in a good shift but were let down by their finishing.

“Southern are a good team and the style of football they play made it hard for us to deal with,” he said. “There were patches where we played some really good football but we didn’t take our chances.”

The other team from the capital were in far better form as Team Wellington kept the heat on Auckland City in the race for the minor premiership with a 4-1 win over Waitakere United. Going into the clash, Waitakere still had a very slim chance of sneaking into the play-offs but those hopes were well and truly brought to a halt as Wellington put on a characteristic attacking display.

Jack-Henry Sinclair set the ball rolling with an early penalty before Andy Bevin made it 2-0 just a few minutes later. Waitakere got themselves back into the contest with a Yuki Ohtsuka header mid-way through the first spell but a Ross Allen strike and another goal to Bevin put Wellington beyond reach in the second half. The visitors passed up a gift-wrapped opportunity to draw themselves level just before the interval when Scott Basalaj made an outstanding save to keep out a Keegan Linderboom penalty.

“I think we thoroughly deserved the victory today with the amount of chances we created,” Wellington coach Jose Figueira said. “We were punished with the first goal and were lucky not to be punished again to make it 2-2 so we were really happy to get those three points.”

Not for the first time this season, Waitakere counterpart Chris Milicich was again left to rue his side’s lack of ruthlessness in front of goal.

“I thought we competed well for most of the game and had periods of domination but the difference was that they took four of their chances and we only scored one,” he said. “The game swung on the penalty save just before half-time because that would have had us at two-all.”