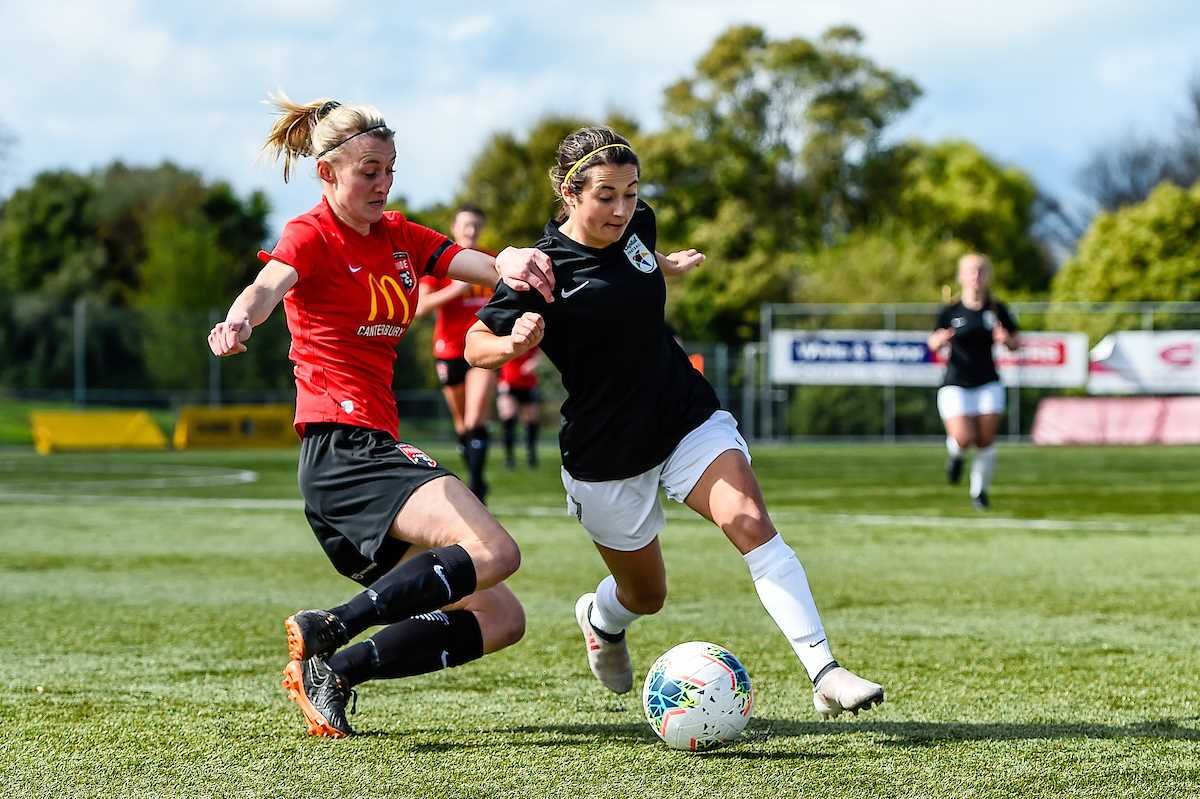 Michaela Robertson, right, in action for Capital in the National Women's League (Photosport)

A pair of uncapped players have been included alongside a wealth of experience in the Football Ferns squad set to take part in the Algarve Cup in Portugal next week.

The squad named by coach Tom Sermanni has a largely familiar look to it with 10 players having at least 60 caps to their name but some exciting new talent will also be on show with skilful attacker Michaela Robertson and young fullback Marisa van der Meer both earning selection.

Another feature of the playing group is the return of centre back Meikayla Moore from long-term injury while goalkeeper Anna Leat is also welcomed back after previously being unavailable.

Experienced defender Abby Erceg was originally named in the squad but is unable to take her place for personal reasons while Anna Green was not considered due to injury.

The Algarve Cup forms a key part of the Football Ferns’ preparations for the upcoming Tokyo Olympics and Sermanni says the scope to experiment is therefore limited.

“It’s not a time to have the luxury of being able to experiment and bring in a lot of new players but I think we’ve brought together our strongest group,” he says.

“The challenge for us is trying to balance getting our team ready for the Olympics and what’s important in doing that but, at the same time, attempting to give opportunities to players who may be on the bubble of making the squad. But every game is vital and a learning process for us to find out what we might need to tweak tactically or selection-wise.”

Sermanni is excited at the potential of 23-year-old Robertson, who was selected for the previous Football Ferns squad last November but suffered an untimely injury.

“We’ve tried to bring Micky in a few times actually but she’s always been hampered by injury unfortunately. So it’s been tough for her in that sense but she keeps bouncing back,” he says.

“I think what she brings is an enthusiasm, energy and injection of pace. She’s a very talented and skilful player individually so it will be interesting to see how she makes that step up to international level.”

Joining Robertson in potentially making a debut in Portugal is van der Meer, who is only 19 and starred for her country in New Zealand’s ground-breaking third-place finish at the FIFA U-17 Women’s World Cup in 2018.

Another member of that historic squad was Anna Leat, who made herself unavailable for international selection prior to last year’s FIFA Women’s World Cup but is excited to be back in the fold.

“She’s in a really good place at the moment,” Sermanni says.

“She had a huge year in 2018 with the U-17 and U-20 World Cups, doing her exams and getting ready to go to America for college. She’s still young but has put in a lot of years and I think she just reached the stage last year where she needed to take a breath. She’s done that and it’s given her a bit of time to reflect,” he adds.

“She’s now keen to continue her international career and that’s a big boost because I think it’s without argument that she’s one of the best young goalkeepers in the world.”

Meikayla Moore returns to the squad after recovering from injury (Photosport)

The return of Moore is just as pleasing, the 23-year-old having worked wonders to return to fitness after suffering a heart-breaking injury on the eve of the World Cup.

“I’ve never been so disappointed and upset as a coach about a player’s injury as I was with what happened to Meikayla,” Sermanni admits.

“She was going into the World Cup in fantastic form – confident, strong, fit and healthy. Her rehab has been incredible and she’s done a job that a professional player with ten years’ more experience would struggle to do.”

Aside from potential debuts for Robertson and van der Meer, another pair of milestones could also be reached on the tour with Sarah Gregorius sitting on 99 caps and Ria Percival – the highest appearance-maker in New Zealand’s footballing history – three games away from hitting the 150-mark.

Gregorius would become just the tenth Kiwi to join a unique club of centurions that consists solely of Football Ferns (the leading All Whites cap-holder is Ivan Vicelich with 88 appearances).

“The best thing about it is that we’ll get some cake and champagne after the game,” Sermanni jokes.

“But seriously it’s a huge achievement and Greggors is one of those players who plays every game for her country with such determination and passion. You couldn’t find somebody who represents her country on and off the field any better. Hopefully, we’ll make it a day she remembers and get the right result for her.”

The Football Ferns kick-off their Algarve Cup campaign on Thursday morning (NZT) against Belgium before going on to meet either Portugal or Italy and another yet-to-be-determined opponent. The other nations competing in the tournament are Denmark, Germany, Norway and Sweden.

Sarah Gregorius is on the verge of her 100th cap (Photosport)