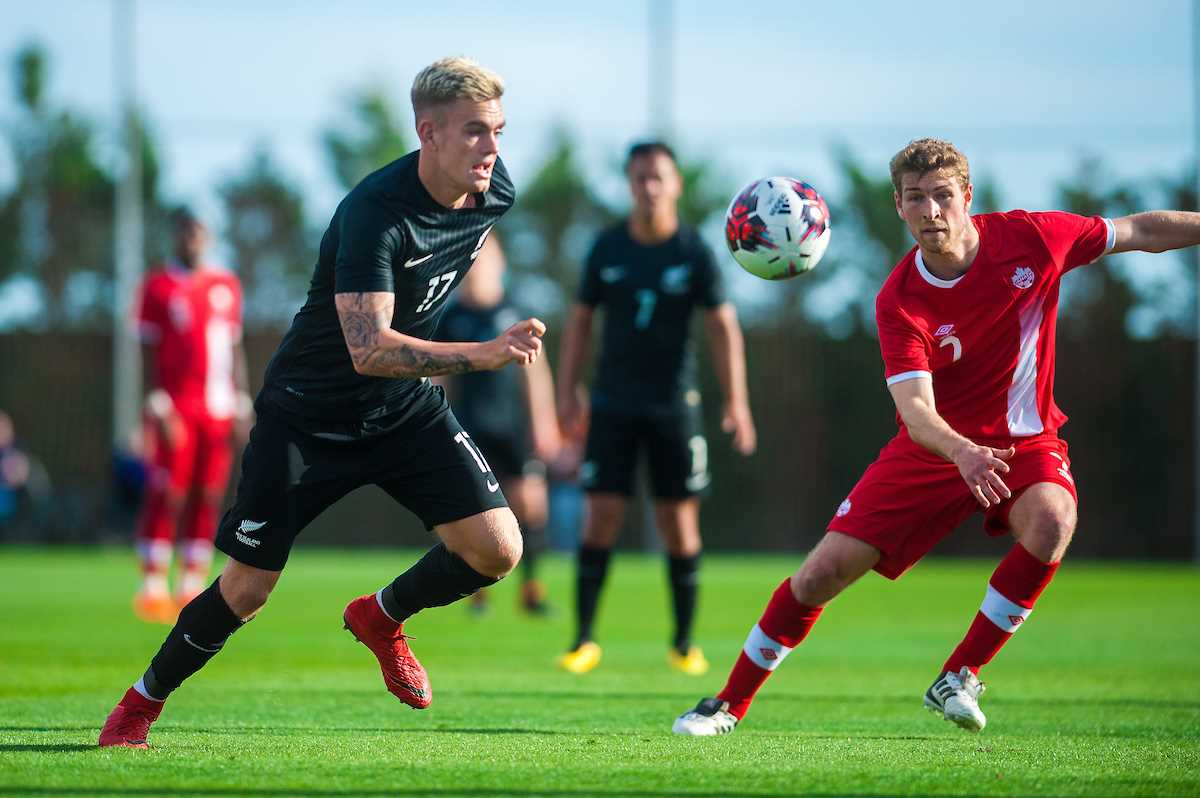 Myer Bevan has made six appearances for the All Whites (Photosport)

Young All Whites striker Myer Bevan hasn’t worn the silver fern in over a year but his long wait will finally come to an end on Friday.

The New Zealand U-23 men are set to take on their Australian counterparts in the first encounter of a two-match series and Bevan is relishing the opportunity to tackle his country’s traditional sporting foes from across the ditch.

“We’re really excited, most of us haven’t played Australia before so we’re really looking forward to these games,” he says.

“There’s such a rivalry between the countries so that makes it even bigger for us and it’s a series as well which creates more competition and makes it more exciting.”

Bevan and his team mates – who include three others with senior All Whites experience in Clayton Lewis, Logan Rogerson and Noah Billingsley – are in a rare position in taking on Australia.

The nations have not come up against each other at U-23 level in over a decade with the last meeting a 3-2 win to Australia in Sydney in 2008.

They have met 10 times over the years with New Zealand’s only positive results being a famous 1-0 triumph in Adelaide in 1996 and a 1-1 draw in Auckland in 2004.

Both sides are preparing for their upcoming bids to qualify for the Tokyo Olympics with New Zealand’s challenge coming later this month in Fiji while Australia must wait until January.

Like New Zealand’s Des Buckingham, Australia coach Gary van Egmond has been able to name a strong squad for the trans-Tasman clashes with the majority of his players stemming from the Hyundai A-League.

“We’ve done a bit of work on them this week, how they are in and out of possession, and we’re fully focused on the job we need to do,” Bevan says.

The 22-year-old most recently represented his country when featuring for the All Whites at the Intercontinental Cup in June of last year and can’t wait to return to the international stage.

“It’s always such a special moment for myself and my family whenever I put that shirt on, regardless of the game. These games being against Australia just makes it even more special,” he says.

The aim for New Zealand in New South Wales will be to continue the momentum gathered in recent months by the country’s young male players. An impressive outing at the FIFA U-20 World Cup in Poland in May was swiftly followed by a remarkable performance at the Pacific Games, in which Buckingham’s U-23 charges upset their senior opposition to claim gold.

Bevan was not involved in either campaign but has looked on with admiration and is delighted to now be part of a quest he hopes will end in New Zealand making an impact at Tokyo 2020.

Away from the pitch, he is pleased to be back on these shores after a three-year stint overseas as a professional. Most of that time was spent in Canada with Major League Soccer outfit the Vancouver Whitecaps while he also had a spell on loan in the Swedish third tier at Husqvarna FF.

“But I really enjoyed my experience overseas, you’re training every day so your improvements come so much faster than if you’re only training two or three times a week. Being in that environment and around professional players helped me a lot and I’m a better player now for sure.”

Returning to the professional scene is a burning desire and the Olympic Games would provide the perfect opportunity to catch the eye of prospective employers.

“Once you’re in that environment and come out, you just want to get straight back into it so my goal now is to progress from here,” Bevan says.

“These Aussie games and the upcoming events are platforms that I can progress through and hopefully become a pro again.”

There have been several changes to the original squad named for the Australia tour with Michael Woud, Elijah Just and Dalton Wilkins being replaced by Aidan Munford, Robert Tipelu and Lachlan McIsaac.