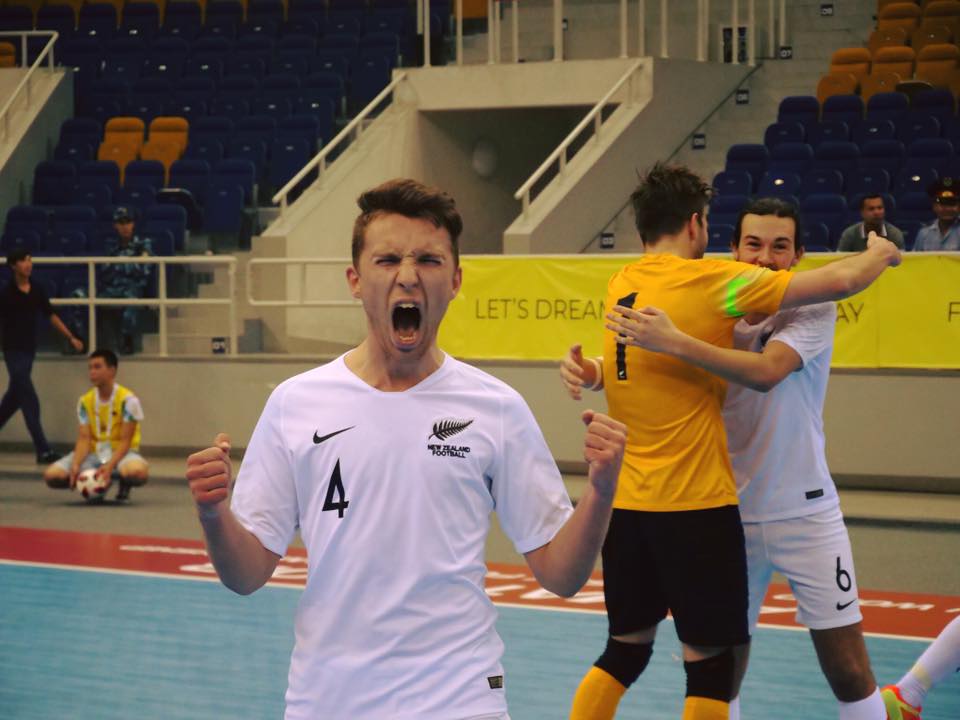 The FISU World University Futsal Championship has ended on a high for New Zealand with both teams recording further ground-breaking results in the final days of the competition.

Having already made history by beating hosts Kazakhstan on the opening day for this country’s first ever victory at a world event, the women were looking to follow that up with another win against the same opponents in their last game. They did just that with a dramatic triumph on penalties after the scores were locked at 2-2 but had earlier lost 4-0 to Canada in their other play-off match as they finished seventh.

The men had gone through pool play without a win but came close in their first play-off encounter, coming out on the wrong side of a five-goal thriller against France. But they went one better in their next game against France, joining their female counterparts by making history with a memorable 2-1 success over Israel – a result that will join the women’s pair of wins against Kazakhstan as among the most significant in New Zealand’s futsal history.

There was a massive carrot dangling for the winner of this meeting as New Zealand and Israel were both looking to avoid finishing in the bottom two of the 16-strong men’s draw. Like the Kiwis, Israel had suffered a disappointing loss in their previous match and would have felt their results had not reflected the nature of their performances.

They began the game strongly and put New Zealand under pressure but Marvin Eakins’ men were very disciplined in their defensive set-up and restricted Israel to very few scoring opportunities, while proving composed on the ball and looking to pounce in attack when opportunities presented themselves.

One of these was claimed by the experienced Tai Barham, who finished off some excellent build-up play in style to give his side a half-time lead. The second half followed a similar pattern to the first with New Zealand continuing to prove hard to break down and Israel’s frustration visibly growing.

They had even more to worry about when the talismanic Jordi Ditfort, who ended the tournament as New Zealand’s top scorer in both genders, found the net from a well-worked free kick to make it 2-0. Israel did manage one reply with a few minutes remaining but Eakins’ side saw the rest of the game out to claim a win each player will treasure for the rest of their lives.

“We definitely stepped up from that narrow defeat to France,” said Ethan Martin, captain for the historic moment.

“The boys really knew this was the game we wanted to target and in the changing rooms before we talked about making sure we finished our chances. We managed to do that and it was amazing. Tai’s first goal really kicked us off and got the spirits really high and the adrenaline kept us going through it.”

The New Zealand men looked to back up their maiden win with another victory in their last game against Belarus, who had comprehensively beaten them 8-1 on the opening day. In a much-improved display from that first-up defeat, the Kiwis had a point to prove against the classy Belarusians and shocked their more fancied opponents to lead 2-1 at the break.

Belarus had taken a lead that was harsh on New Zealand but Naji Ghamri turned one in directly from a corner kick to equalise before Thomas McGowan put his side in front with one of the goals of the tournament, spotting the goalkeeper off his line and firing home from almost the full length of the court.

The experience and quality of Belarus shone through in the second half though and they made New Zealand pay severely for their mistakes to claim a 7-2 win.

The New Zealand women were able to sign off with a win, their second of a ground-breaking campaign, but were made to work hard for it by Kazakhstan and trailed 2-0 early in the second half. Nic Downes’ team then looked to launch a stirring comeback and, although going fifth man had not paid off earlier in the tournament, employed this tactic again to try to haul themselves back into the contest.

The gamble reaped reward on this occasion, Britney-Lee Nicholson giving them hope before a last-gasp equaliser from Shivanthi Anthony arrived with only seconds left on the clock. That meant the game would be decided on penalties, the first two of which were successfully converted by Teejay Lyne-Lewis and Dayna Manak before goalkeeper Rivalina Fuimaono saved Kazakhstan’s next effort, allowing Sarah Alder to slot home the decisive spot kick and give her country another memorable victory.

The players will now return home to compete in New Zealand Football’s range of competitions and there is not much rest for the men with most set to take part in the upcoming Futsal National League, which kicks off in mid-October.