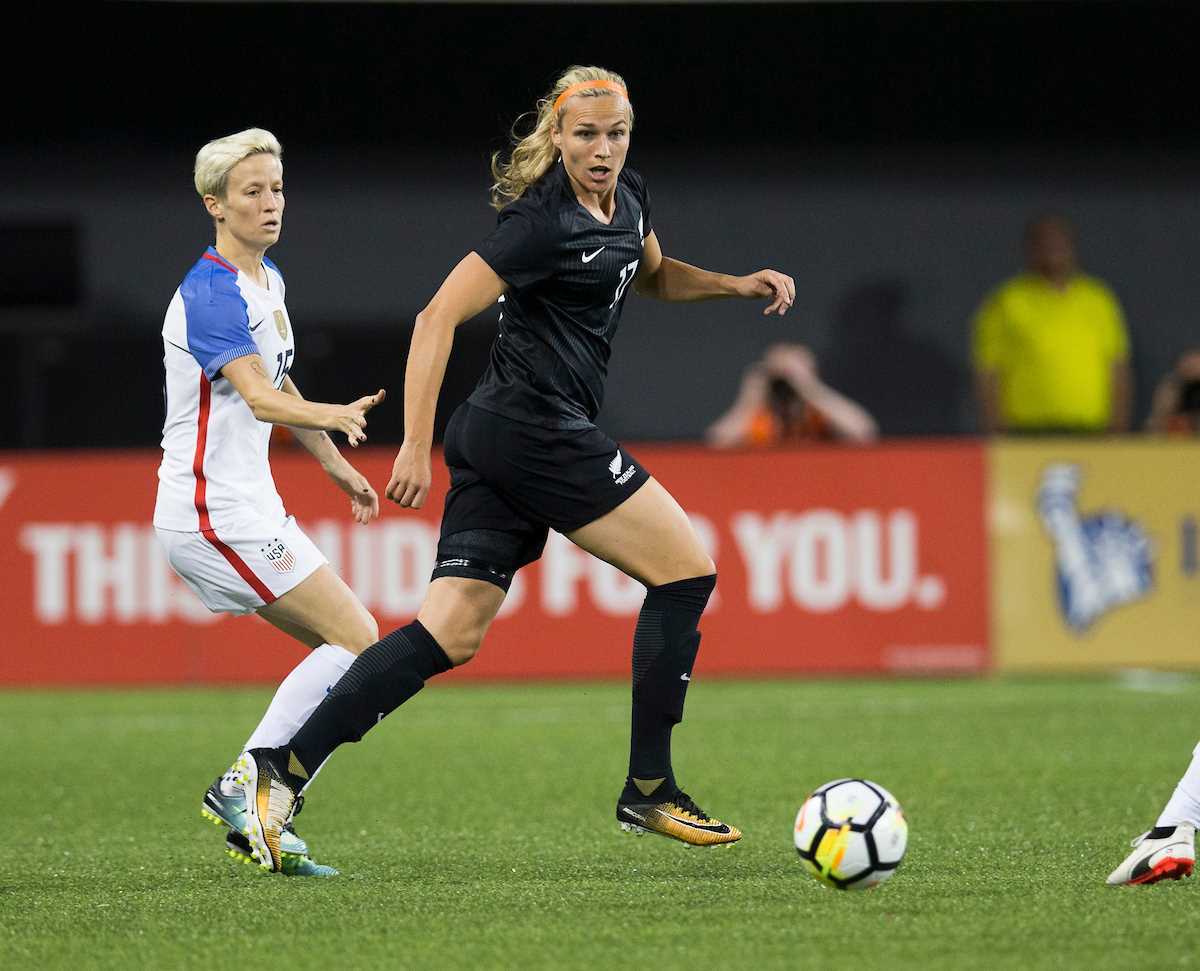 Ahead of the Football Ferns’ meeting with Japan at Westpac Stadium in Wellington on June 10, get to know forward Hannah Wilkinson and hear all about her footballing journey.

How did you get into football?

I followed my two brothers who had started playing, then my dad began coaching. It soon became a passion!

What has been your pathway to international football?

I moved to Auckland when I was 17 and that same year I made the New Zealand U-20 squad, and then the Football Ferns squad. I played for Glenfield Rovers while part-time studying in Auckland before I decided to play collegiate football in America at the University of Tennessee. I spent five years playing and studying there before I moved to Sweden, where I now currently play in the Damallsvenskan for Vittsjö GIK.

Who inspired you when growing up to be an international footballer?

Football Ferns legend Maia Jackman! I remember having a poster of her on my wall.

What does it mean to you to wear the Football Ferns shirt?

There is no greater honour than wearing the Fern and representing the country that I absolutely love. I feel nothing but pride whenever I get that golden opportunity to wear it.

What has been your biggest setback and how did you overcome this?

In 2015, I tore the ACL in my left knee. It is such a devastating injury, not only for the body, but for the mind as well. I learned the true power of things like patience, perseverance and belief. I developed a strong sense of appreciation for the game, having been away from it for so long. I was able to use the time I had to analyse the game from a different perspective on the sideline, which helped me continue to learn despite not training. Once I was back, physically, I was stronger, more balanced and more stable. And I loved playing the game, even more so than before I was hurt.

What would be your message to kids aspiring to be a Football Fern?

Work hard, believe you can, and never give up. If you feel like you want to quit, look back and remember why you started in the first place.

How would you describe the Football Ferns as a team?

Unique as individuals, unbreakable as a whole. We have so many amazing individuals with different talents, characteristics and stories. When we come together through the shared bond of football, we display a team culture that is like no other, an incredible pride for ourselves and for our country. Despite any forces of change, our team culture and our values are strong, and we will persist.

What opportunities away from the field has football provided you?

When I first made the Football Ferns squad in 2010, I was granted a Prime Minister’s Scholarship, which paid for a full year of study at AUT in New Zealand. After that, I transferred to the University of Tennessee, where I was granted a Full Athletic Scholarship, which paid for all of my study. I left the University of Tennessee with a Bachelor of Arts in Psychology and a Post-Graduate Certificate in Cultural Studies in Education. I now hold an NCAA Post-Graduate Scholarship to be used in the next two years. As of last year, I have also earned a Nike Elite Athlete sponsorship.

What personal traits do you think you have developed from playing football which you believe will help you through life?

Football has shaped me into a person that trusts the factors of hard work, sheer belief and perseverance. These concepts are not just words but things that drive you to success and happiness. Football has also taught me that you cannot control everything. But what you can control is your attitude and your effort. And those are also things that undoubtedly lead to success and happiness.