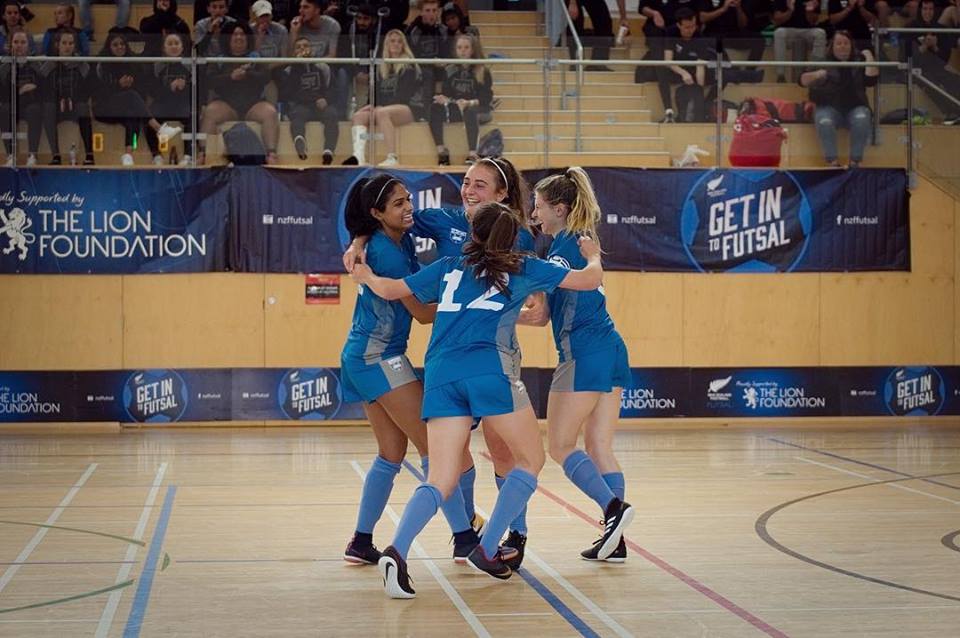 The men’s and women’s titles at the National University Futsal Championships have both gone to new homes after an action-packed three days in Christchurch.

The best futsal talent from tertiary institutions around New Zealand converged on the Ara Institute and Cowles Stadium over the weekend with the University of Auckland looking to defend their men’s title and AUT hoping to do likewise in the women’s competition. Neither were able to pull off a successful title defence though as Victoria University stormed home in the male competition and the University of Auckland claimed the female honours.

The University of Auckland were defeated just once on their march to the women’s title, recording four wins and slipping up only against Victoria University. Auckland fell 3-1 in that clash but got their own back when it mattered in the final, reversing that scoreline against the same opponents to pocket the gold medals.

In the men’s competition, defending champions the University of Auckland came through pool play undefeated with two wins and a draw but the side that would go on to usurp them did even better, Victoria University winning all three of their group games.

The competition’s two best-performed teams then deservedly met in the final and Victoria proved too strong with a 6-2 victory.

Victoria picked up further honours in the individual stakes, in which Sean Beresford received the Golden Gloves and Luc Saker was named MVP. The Golden Boot went to Jordi Ditfort from the University of Waikato.

Tessa Leong was the big winner in the women’s individual awards, claiming both the Golden Boot and MVP for her efforts for the title-winning University of Auckland, while Georgia Moore from Victoria University was given the Golden Gloves.

Coach Nic Downes says the success of the University of Auckland women’s team has been years in the making.

“It went to plan in the end and we got the outcome that we wanted,” he says. “We been trying for a few years to win this tournament and a number of the players have been involved for multiple years so everyone is pretty happy obviously.”

Downes believes the turnaround from that earlier defeat to Victoria was the result of some tactical tweaks.

“They came out really well organised in that first game, defended really well and caught us out. They were very much in control for a large proportion of that game and we didn’t quite have an answer,” he recalls. “In the second game we had a bit more of an understanding about them and how we wanted to play against them. It showed in the final and we did what needed to be done.”

The triumphant coach in the men’s competition was Callum Holmes, who feels Victoria’s title win was down to an emphasis on style of play.

“We went in not really focusing on winning, we just wanted to focus on our performances, structures and how we wanted to play,” he says.

“The boys were really good in that they didn’t actually talk about the results, they just wanted to improve in every game. Barring the semi-final where we didn’t play that well and just scraped through, we performed better and better in each game.”

Both winning coaches work full-time at federation level – Downes as Development Manager for Auckland Football and Holmes as a Development Officer for Capital Football – and say the title triumphs are part of a wider plan.

“It’s been a long-term thing for us in Auckland,” Downes says. “We put a plan together a few years ago and a number of these players have been playing across the different environments – I think we’re starting to see that’s now having an effect.”

The Victoria men’s squad was likewise put together with an eye on the future.

“We picked players in this team who are going to be around in the Capital region for the next three to four years and beyond – it’s a long-term plan to develop players in the system of play we want,” Holmes says.

“There’s six or seven of those boys that will be in and around the U-19s squad come youth nationals’ time. And then I think all of the squad will be in with a shout for the national league towards the end of the year so it’s definitely a building block.”