Football Ferns too good for Thailand 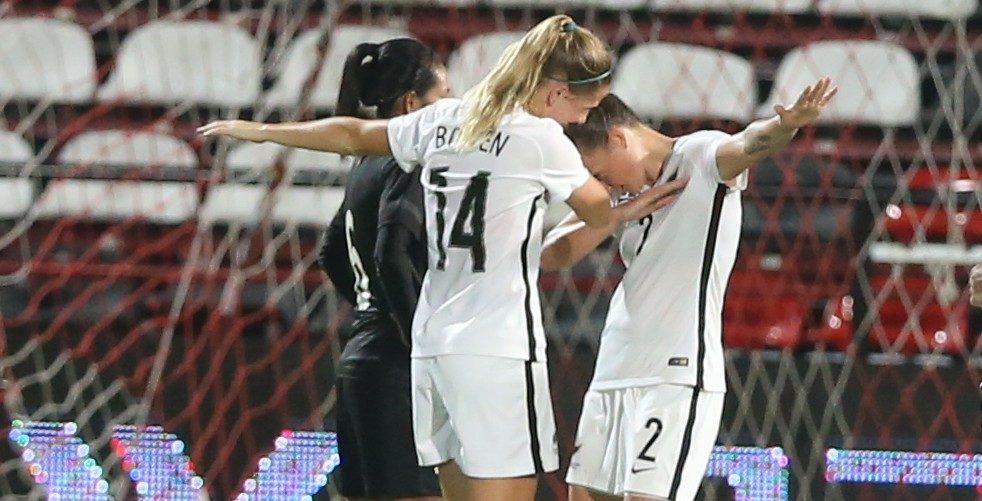 The Football Ferns have finished the year on a high note after they put away Thailand 5-0 in a dominant performance tonight in Bangkok.

The World No 19, who were the better team in the opening 0-0 draw on Saturday night, picked up where they left off but were much more clinical in front of goal to secure an important win as they continue to build towards the 2019 FIFA World Cup in France.

The Ferns, who secured their biggest win outside of Oceania since 1993, delivered the type of dominant and clinical performance that interim Football Ferns co-coaches Andreas Heraf and Gareth Turnbull had asked for to finish the tour.

“The work between game one and two really paid off so we are really pleased for the girls,” said Turnbull. “Winning 5-0 in any game is good but to do it in an international fixture is a great achievement. We were really pleased with the tactical application – the high pressing and energy pinned them back in their half and enabled us to have a really high platform to play from.”

Heraf and Turnbull made two changes to their starting line-up from the first game with teenager Anna Leat and Anna Green coming in for Erin Nayler and Hannah Wilkinson respectively.

Striker Amber Hearn was joined up front by Annalie Longo as the Football Ferns looked to play a fast-paced game on a much-improved surface from what they experienced on Saturday night.

Right from the outset the Ferns – led by their senior pros of captain Ali Riley, Ria Percival, Katie Bowen and Hearn – pressed the World No 24 and locked them in their own half where they turned the ball over under pressure.

“Moving Annalie into a more central position gave us a little more quality in that final third area and moving Ali forward has given us a little more athleticism and pace to close down those areas,” said Turnbull. “Katie Bowen and Ria Percival delivered another strong game in the midfield for us, along with Stotty [Rebekah Stott] and Mouse [Meikayla Moore] so the spine of the team was incredible today.”

With the ascendancy in the midfield battle, the opening goal seemed somewhat inevitable. Hearn opened the scoring in the 25th minute when she got in between two defenders and tucked home a fine cross from CJ Bott on the right wing to gain a deserved lead.

The well-worked move saw Hearn, who returned after missing the USA tour, score her 54th in her 122nd A International for the Football Ferns as she continued her prolific goal scoring career.

There was more to come from the visitors as the high press created plenty of opportunities. They earned a free kick just outside the Thai 18-yard box and midfielder Longo delivered a superb ball to the back post. It caused Thailand’s keeper Waraporn Boonsing problems and Bowen was on hand to poke home for her second goal in her 49th international.

The Ferns went into the sheds with a deserved 2-0 lead in the hot and humid conditions and there was more to come after the break.

Again Bowen was in the thick of the action. Percival, playing a central role for the Ferns in the midfield, whipped in a corner in Bowen’s direction and the Kansas City FC midfielder was dragged down in the box and the referee Nunitkan Buuasa did not hesitate in pointing to the spot. Percival coolly finished to the bottom left corner to continue the Ferns’ momentum.

The waves of white shirts kept pouring forward and Riley delivered an inch-perfect cross which Hearn chested down in the path of Longo who smashed home a good finish to make it 4-0 with just over 20 minutes to play.

The final scoring act came in the 75th minute when Buuasa was called in to make another straightforward decision. Bott produced another testing cross and Hearn copped a physical challenge which sent her to the ground. Percival again stepped up and made no mistake with a penalty, this time to the other side of the keeper.

With the result confirmed, the Ferns coaches blooded some new talent. Reserve goalkeeper Victoria Esson made her long awaited debut for the national team and she was joined by Maggie Jenkins, Elizabeth Anton and Malia Steinmetz in making their first appearances for the Football Ferns. The night will be one for them to remember and the Ferns should go into an important year in 2018 with plenty of confidence on the back of a dominant performance away from home.