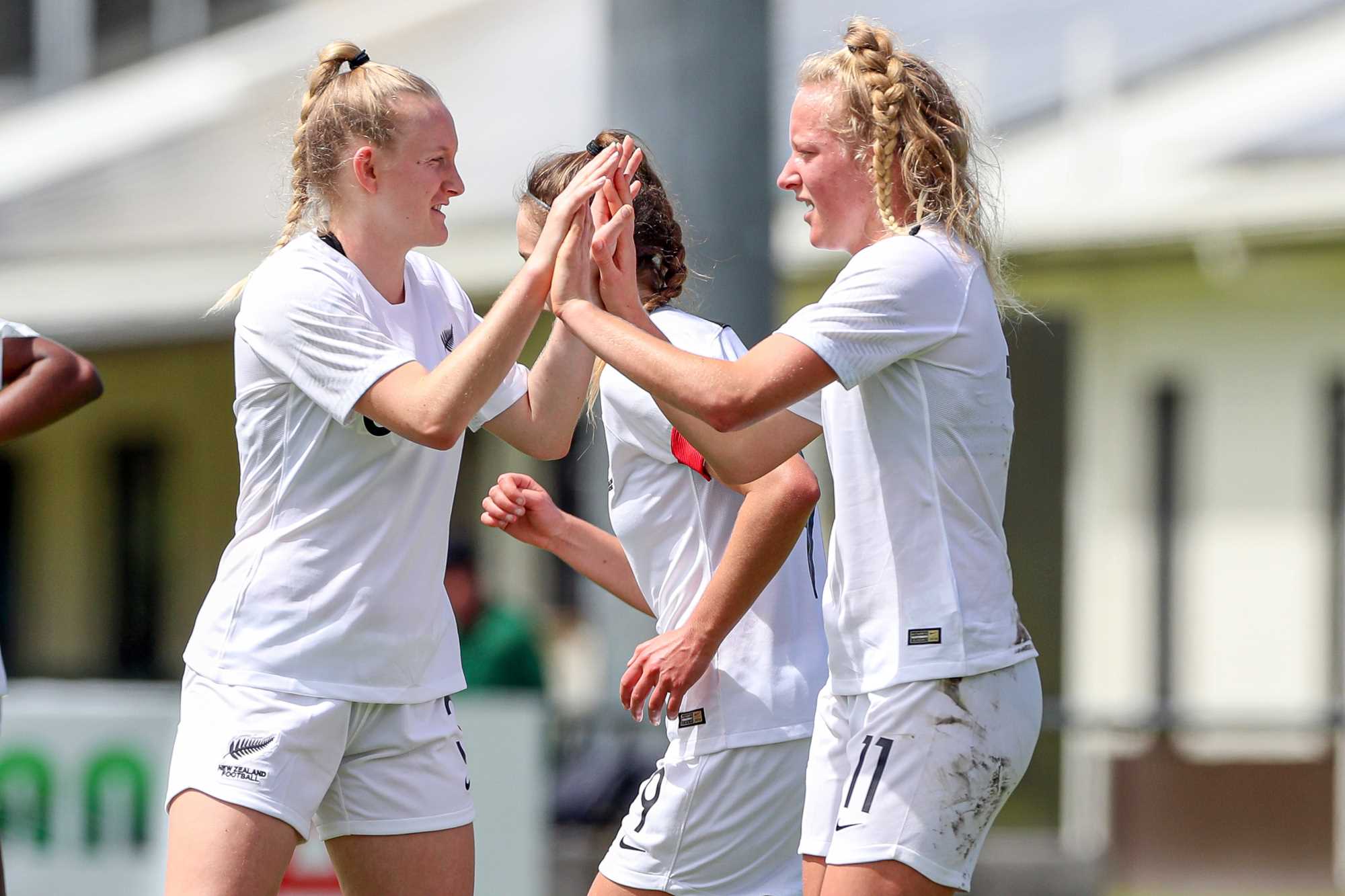 Kelli Brown, right, now has a remarkable 15 goals to her name (Phototek)

Favourites New Zealand have continued their winning ways at the OFC U-19 Women’s Championship, earning a second successive victory with a comprehensive 5-0 triumph over Tahiti.

Having made a real statement of intent in their opening match by sweeping aside Samoa in record-breaking fashion, the Kiwis were heavily favoured to repeat the dose three days later in Rarotonga.

While they didn’t come close to matching that earlier 30-0 scoreline, New Zealand again showed a clinical streak in front of goal while coach Gemma Lewis will be just as pleased to have kept another clean sheet.

Kelli Brown had found the net a remarkable 11 times in the massive Samoa win and picked up exactly where she left off at the CIFA Football Academy, notching a first-half hat-trick before adding a fourth in the second stanza.

Strike partner Maggie Jenkins had earlier got the ball rolling in just the seventh minute, coolly slotting home from the penalty spot for her sixth goal of the tournament after a handball inside the Tahiti box.

Brown then took over the net-bulging, a low drive doubling New Zealand’s advantage just a few minutes later before another effort from close range made it 3-0 with only a quarter of an hour gone.

Having seen just how ruthless the defending champions can be against Samoa, the Tahiti players must have feared the worst at this stage. But they then began to provide more resistance and it wasn’t until just before the break that New Zealand had a fourth, Brown completing her hat-trick with one of the last kicks of the half, this time being presented with a simple tap-in.

Lewis made full use of her bench in the second half as Ava Collins, Rose Morton and Charlotte Wilford-Carroll all entered the fray, which posed a problem with 15 minutes remaining when defender Mackenzie Barry picked up a serious injury and had to leave the field.

New Zealand were therefore forced to see out the match with only ten players but were not made to pay as Brown had given them the comfort of a fifth goal shortly before Barry’s departure, calmly rounding the goalkeeper before smashing home.

Lewis confirmed Barry’s injury had a major impact on the team’s performance in the final part of the match.

"She is a really big member of our squad so it was really hard for the girls to keep going to just see out the game, but their mind wasn’t really focused on the game and they were more focused on Mackenzie."

The tournament’s golden boot now appears all but wrapped up just two games in as Brown has a whopping 15 goals to her name.

Next in the sights of Brown and co are American Samoa, whom New Zealand face in their final Group B game on Saturday at 2pm (NZT).