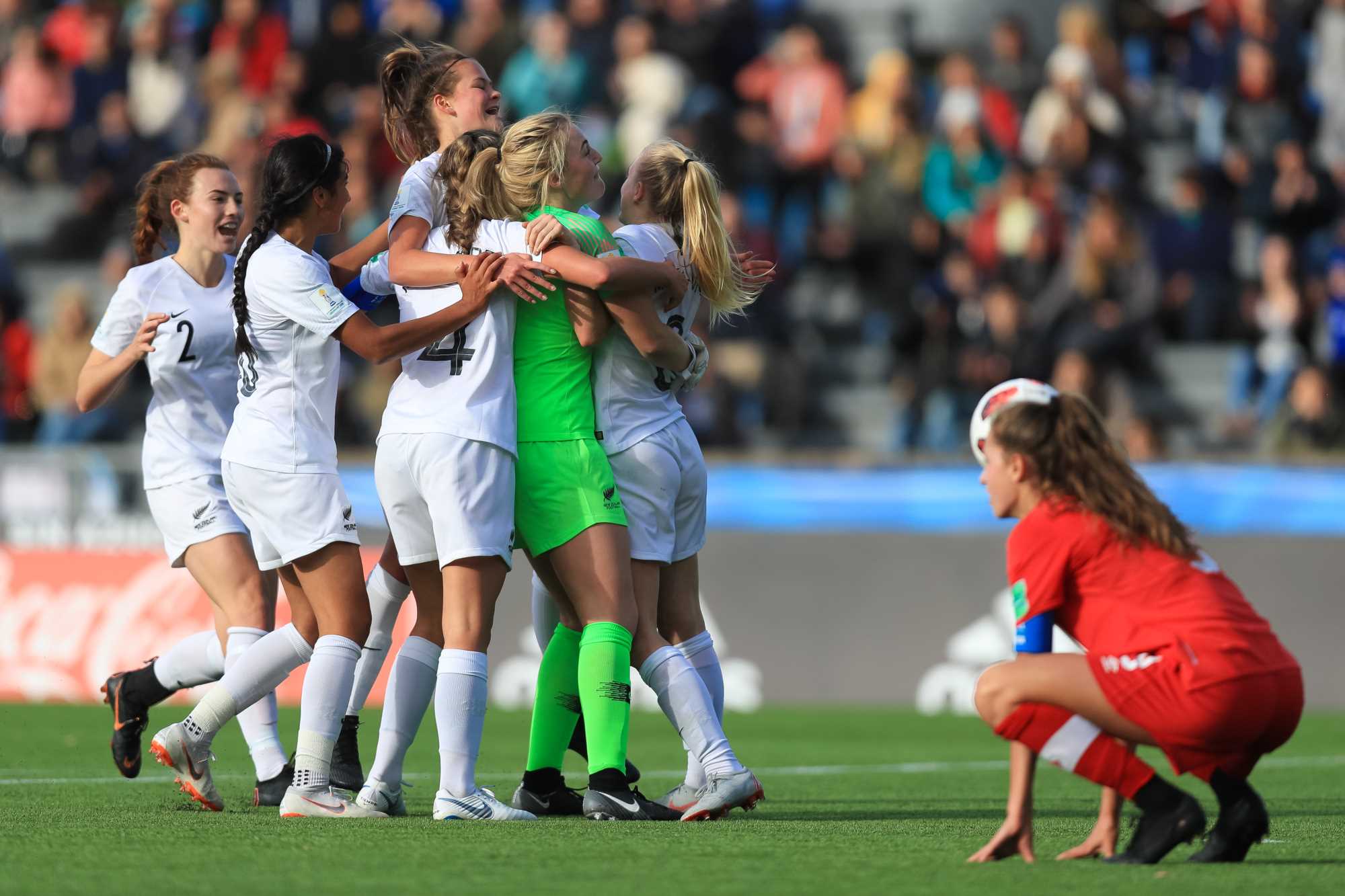 The New Zealand U-17 women have made history at the FIFA U-17 Women's World Cup Credit: GETTY Images

New Zealand have made history today by claiming the bronze medal at the FIFA U-17 Women’s World Cup after defeating Canada 2-1 at the Estadio Charrúa in Montevideo.

Leon Birnie’s side became the first New Zealand national team to claim a medal at any FIFA tournament.

New Zealand got off to a fantastic start when they scored twice in the opening 13 minutes through a Grace Wisnweksi double, but Canada got within striking distance when Lara Kazandjian scored a stunning solo goal in the second half and New Zealand held on for a historic win. Birnie said the bronze medal capped off an incredible tournament for his young team.

“Who would have thought?” said Birnie following the game. “We came over here and we had a dream to get out of the group. We made history by doing that and then got into the semi-finals and created more history and now we have just got a bronze medal in a World Cup. How good are these players? Great performance. The first half we were really good and the second half was just pure determination and hanging in there to get that medal.”

Birnie thanked everyone who had supported them on their dream run at the FIFA U-17 Women’s World Cup in Uruguay.

“We have a few big thanks to make. To all the staff over here, the players, the families and friends who are over here we have had an amazing month. Everyone back home and the support from the football community and media, we appreciate it.”

Captain Aneka Mittendorff said it was a special moment for her team after an incredible tournament.

“It feels fantastic,” she said. “We did it, we came third. It is so surreal. We are going to celebrate this win all night long.”

The next generation of Football Ferns got off to a perfect start in the windy and fine conditions when Wisnewski scored the fastest goal in the history of the tournament. New Zealand pressed high up the pitch and Canada tried to do too much deep in their own half. Maggie Jenkins turned the ball over and it fell for Wisnewski to tuck home a good finish home at the near post in 16 seconds. Wisnewski’s quick-fire goal broke the record of Nigeria’s Soo Adekwagh who scored in 22 seconds on 30 October 2008.

There was more to come from the Oceania champions when Wisnewski doubled the lead in the 12th minute. Amelia Abbott linked with Jenkins who put forward a great through-ball. Wisnewksi showed great composure on the ball and hit a powerful shot to defeat the Canadian keeper Anna Karpenko.

The New Zealand team, who defeated Canada 2-1 in the lead-up to the tournament, were off to the perfect start and in control in the bronze medal match.

Canada came back into the match and with a strong wind at their back, dominated possession in the first half with 62 percent of the ball. But it did not faze the Kiwi team who defended staunchly at the back. Leat, the Player of the Match in that historic quarterfinal win over Japan, again showed great composure when she when came off her line to deny Canadian captain Jordyn Huitema. Leat had another superb match in goal and New Zealand held a 2-0 at the break.

The Kiwis had a chance to put the game to bed early in the second half when an opportunity fell for Wisnewski in the 56th minute.  The 16-year-old from the Hamilton Wanderers came within inches of securing her hat-trick when her left foot shot from close range ricocheted off the left post.

Soon after, Canada came back into the match when Kazandjian scored in spectacular fashion. The midfielder dragged the ball onto her favoured left foot and hammered home past Leat in goal.

That goal gave Canada huge confidence and they poured forward time and time again in the final 20 minutes. Captain Huitema, Caitlin Shaw and Jayde Riviere all had chances but the Kiwis – led by Hannah Mackay-Wright, Mittendorff and Leat in goal - defended like their lives depended on it and kept them out.

History was made. New Zealand were medallists for the first time at a FIFA tournament.