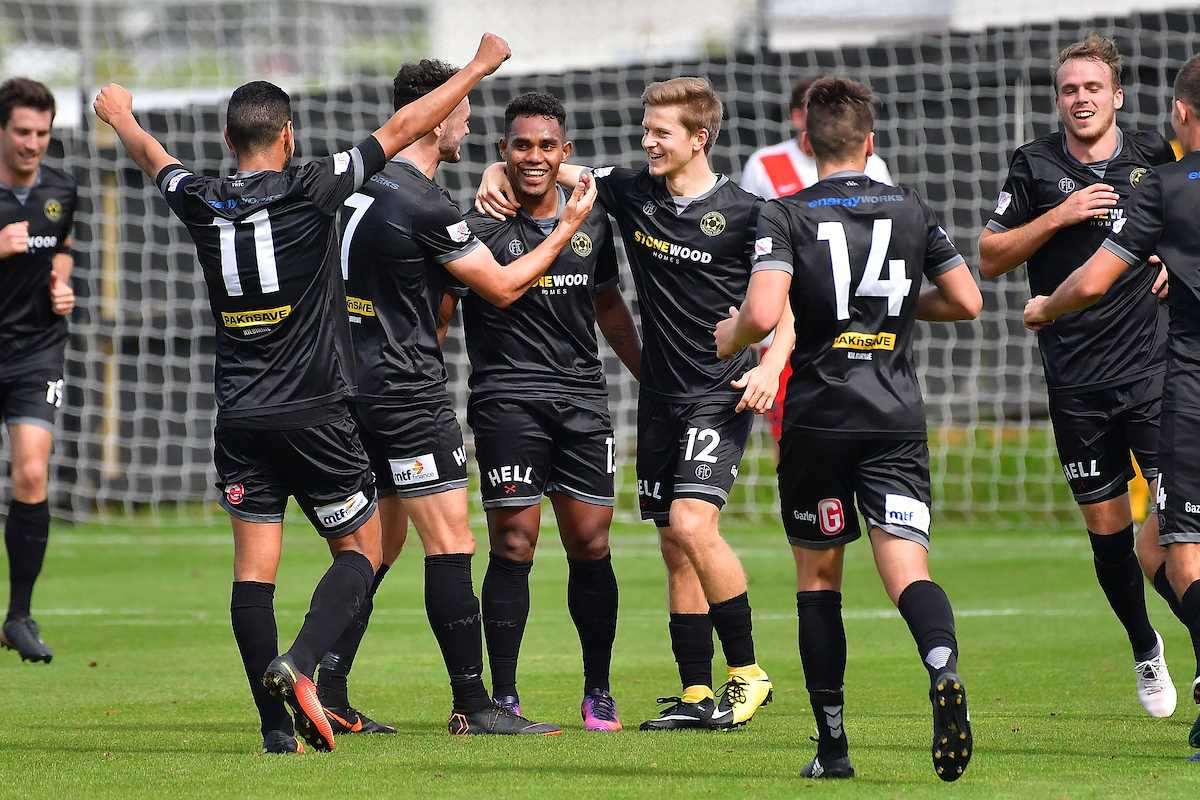 The battle to be regarded as the best team in the country will again be fought out by Auckland City and Team Wellington after the latter earned a hard-fought 1-0 win over Canterbury United in the second ISPS Handa Premiership semi-final this afternoon.

Auckland City had already booked their place in the Easter weekend final with a comfortable 4-0 success over Eastern Suburbs on Saturday but defending champions Wellington were made to work much harder for the right to join them today at David Farrington Park.

The previous semi-final to be held at the venue left a lot to be lived up to as last season’s corresponding fixture produced one of the all-time great ISPS Handa Premiership encounters, Team Wellington eventually going through on penalties after a scarcely believable 6-6 draw against Waitakere United.

A repeat of anything like the same degree of entertainment was always going to be a long shot this afternoon and it was indeed a very different type of game as clear-cut chances proved hard to come by.

Canterbury United went into the match with plenty of confidence after recovering from a sluggish start to the season to string together an unbeaten run of seven matches at the business end of the campaign. But Wellington had likewise not tasted defeat since mid-January and were warm favourites to defeat the Dragons in pleasant but windy conditions in the capital.

The visitors didn’t appear to have read the script early on though as they started the brighter of the teams, enjoying plenty of the ball and coming agonisingly close to opening the scoring. A bouncing loose ball broke out to Futa Nakamura some distance from goal and, despite the range and angle appearing to be against his favour, he unleashed a sweetly-struck drive that cannoned off the bottom of Wellington’s post and away to safety.

At that stage, Canterbury were looking capable of causing an upset and qualifying for their second ever final but, unfortunately for coach Willy Gerdsen and his troops, that was to be their best sight of goal as the hosts gradually began to take a stranglehold on the game.

Wellington were without one of their key performers in captain Justin Gulley – away on international duty with the All Whites – but that ironically seemed to work in their favour as a man who may not have been playing had Gulley been available turned in a match-winning performance. New Caledonia international Roy Kayara caught the eye with an all-action display in the first half and earned the personal reward his efforts merited just before the half hour, athletically meeting a firmly-driven corner to head it home.

Kayara had a big hand in another opening for the home side when his pin-point long pass into the box picked out Ross Allen and the striker brought it down beautifully but couldn’t find the target. With Wellington enjoying total dominance towards the end of the half, Canterbury needed to rally at the break and respond appropriately.

The Dragons now had the stiff breeze at their backs and did manage to put Wellington under a higher degree of pressure, nearly getting on the scoresheet in unusual circumstances two minutes in when Scott Basalaj had to palm away a deep free kick pumped into the box by Gary Ogilvie.

Nakamura had another good chance to find the net soon after but fired straight at Basalaj from just inside the box and Ogilvie was left to rue his lack of a finishing touch when teed up for a strike on the edge of the area, miscuing his effort to put it well over the bar.

Canterbury did all they could to take the match to extra time in the final ten minutes, even throwing centre back Tom Schwarz up front, but failed to trouble Basalaj as Wellington completed the job in a professional manner.

Team Wellington midfielder Mario Ilich admitted Canterbury had the hosts on the back foot in the early stages but with pleased at the way his side responded.

“I think they really brought the game to us in the first 15 minutes and it was a bit of a battle,” he said.

“But we got through that and really took control of the game in the first half, we had a few great opportunities to score and took one of them, luckily enough. On another day, another couple might have gone in but we’ll take the one and it was a great performance,” he added.

“They have a lot of threats up front and are very solid defensively so we knew what they had and every time we’ve faced them this year it’s been a difficult task. So we’re very happy to book that place in next week’s final.”

Canterbury captain Ogilvie was hugely disappointed to have missed out on a place in the final but was full of pride for the endeavour of his team mates.

“We’re gutted to come off without a result today,” he said. “The boys dug deep and gave everything like we have all season – we couldn’t have given any more but it just wasn’t our day. It was a good season but we would’ve liked to have gone one further.”

Defending champions Wellington have again now booked a meeting with Auckland City in the ISPS Handa Premiership final, this year’s edition of which will take place at QBE Stadium in Auckland on April 1 from 4.35pm. These sides have faced each other in three of the past four finals and Wellington are aiming for a three-peat of titles after winning the last two.