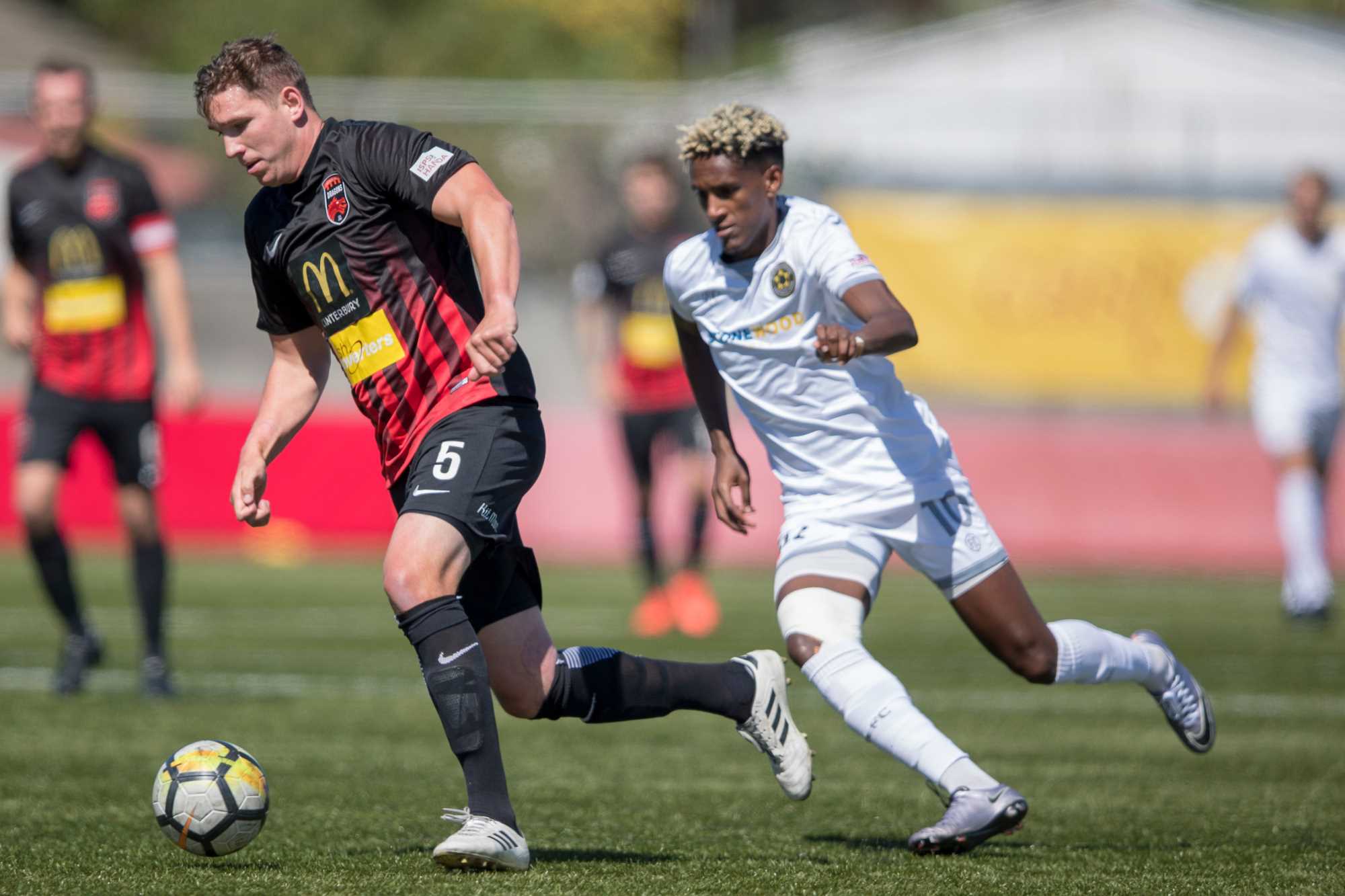 Auckland City are on the cusp of the minor premiership in the ISPS Handa Premiership after overcoming Eastern Suburbs 1-0 this afternoon in a tough battle at Kiwitea Street.

The Lily Whites got off to a fast start and put the six-time champions under pressure in the opening 20 minutes, but the Navy Blues regrouped and were the dominant side for most of the match.

Forward Emiliano Tade hit the post in the 69th minute and Darren White had a good penalty claim turned down, before Callum McCowatt delivered the decisive strike in the 83rd minute to secure a home semi-final. The impressive young forward gathered a good ball from Micah Lea’alafa outside the box and transferred to his left and delivered a shot across Lewis Caunter which gave the keeper no chance.

The win sees Ramon Tribulietx’s team climb to 37 points and three points clear of their main rivals Team Wellington, who drew 0-0 with Canterbury United in Christchurch, at the top of the ISPS Handa Premiership.

Auckland City, who are looking to claim the minor premiership for the ninth time, take on the Wellington Phoenix Reserves at QBE Stadium in Auckland next weekend.

There is a fascinating battle in store for second place in the final round – with a home semi-final and a place in the OFC Champions League on the line - with only two points separating Team Wellington (34), Canterbury United (33) and Eastern Suburbs (32).

In the other top-four clash of round 17, Team Wellington and Canterbury United could not be separated at English Park. It was a thrilling encounter between the defending champions and the Dragons without any goals to show for the action.  In the first half, Stephen Hoyle went within inches of giving the home side the lead with a well-worked one-two back-heel from Travis Nicklaw in the 20th minute. After half-time Gary Ogilvie tried his luck from long range with the Team Wellington keeper off his line, but his shot was wide.  In the 62nd minute, Jack-Henry Sinclair went within inches of giving Team Wellington the lead but could not convert.

Team Wellington coach Jose Figueira felt his side had the better of the game and was disappointed they couldn’t secure all three points in the penultimate round.

“In football, you can have as many chances as you like, and sometimes they don’t go in.” said Figueira, who is also the Assistant Coach of the All Whites. “I was really happy with the way that we played but it was just those finer moments, we needed a bit more finesse in front of goal.”

There was also little separating the Wellington Phoenix Reserves and Tasman United at David Farrington Park in Wellington. Experienced forward Paul Ifill won the game for Tasman deep in injury time when he found space in the box and converted from around the penalty spot for his second goal to secure a 3-2 win. The contest was end to end with the lead changing throughout. Maksym Kowal got the visitors on the front foot before All Whites forward Monty Patterson converted from the penalty spot for his first goal for the Phoenix Reserves.

Ifill also took his penalty chance before the Phoenix’s Ollie Whyte levelled things up before Ifill claimed all three points in the 93rd minute which sees Tasman United fifth on the ladder.

Waitakere United have not had the 2018 they would have hoped for and it continued this afternoon when they went down 2-1 Hawke’s Bay United at Trusts Arena in Auckland. The Brett Angell coached side went into the sheds 2-0 after Sam Adjeu bagged a double before the break. Waitakere looked to fight back and a special goal from Charlie Thomas in the 83rd minute gave them faint hope of claiming a point at home but Hawke’s Bay held on for a morale-boosting victory on the road.

In the Saturday game, Southern United were fast out of the blocks at Sunnyvale Park in Dunedin to lead Hamilton Wanderers 3-0 at half time. The Paul O’Reilly coached side, who spent most of the ISPS Handa Premiership in contention for the playoffs, got off to an ideal start when Alex Ridsdale scored a quick-fire double and Garbhan Coughlan also converted from the spot inside the first 30 minutes.

Tommy Semmy, who is in the running for the ISPS Handa Premiership MVP of the season, was the Wanderers’ most dangerous player throughout and he was rewarded when he snuck one under the keeper Liam Little in the 83rd minute.

Auckland City are the favourites to be the minor premiers, but there is plenty to play for in the final round of the ISPS Handa Premiership in the battle for second. Eastern Suburbs hosting the Canterbury United Dragons and Team Wellington taking on Hamilton Wanderers at home.