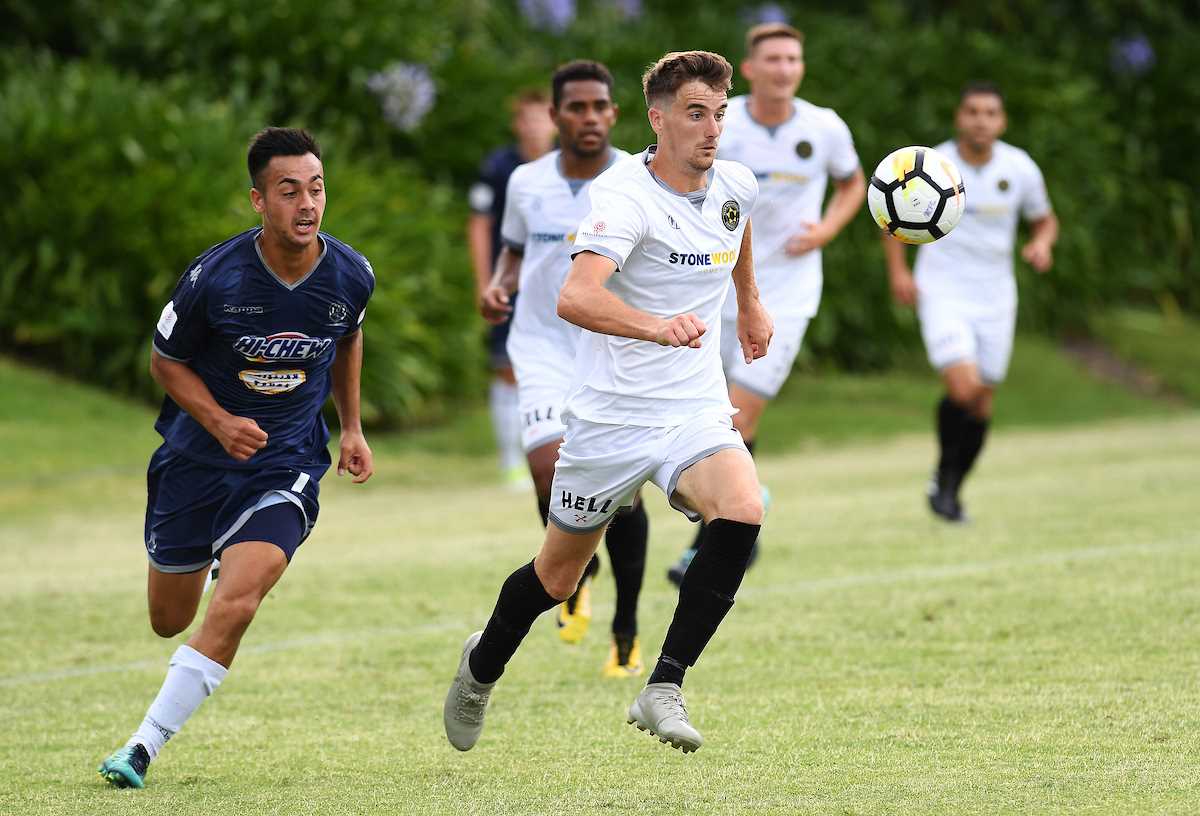 The top four in the ISPS Handa Premiership has a secure look to it after a goal-laden day in which Tasman United emerged as the only side seemingly still capable of breaking into the play-off placings.

With the leading trio of Auckland City, Team Wellington and Eastern Suburbs having all but secured their post-season berths, the fight for the fourth and final spot now appears to be between the South Island pair of Canterbury United and Tasman, both of whom secured vital victories this afternoon.

Trailing fourth-placed Canterbury by three points and having played one game more than the Dragons, Tasman were fully aware that a win was a must at home to Hawke’s Bay United. But Brett Angell’s men also harboured hopes of continuing their proud recent record of play-off qualification – they have made it through in each of the past five years – so it was do-or-die for both teams in Nelson.

The match lived up to its billing at Saxton Field as Paul Ifill rolled back the years for Tasman against one of his old clubs by notching a match-winning hat-trick. Maksym Kowal and Lyle Matthysen also got on the scoresheet for the hosts while Graham Craven and Birhanu Taye struck for Hawke’s Bay, the latter slotting home his effort from the penalty spot. The 5-2 outcome was effectively decided in a chaotic last ten minutes, in which four of the goals were scored.

Remarkably, the scoreboard attendants were even busier in the capital, where Eastern Suburbs went on the rampage against the Wellington Phoenix Reserves to post a 7-1 win – their largest margin of victory since their return to national league level last season. Andre de Jong and Michael Built led the way with a brace each while Derek Tieku and Moses Dyer also found the net and an own goal rounded out the scoring for the visitors. The ‘Wee Nix’ sole consolation went to Logan Rogerson on the stroke of half-time.

“We were under a bit of pressure after losing two in a short space of time,” Suburbs coach Danny Hay said. “The boys were hurting from that and also from the last time we played the Phoenix, when I thought they were by far the better team. So we felt like we had something to prove and we showed that we’re capable of playing some very good football.”

Phoenix coach Chris Greenacre offered no excuses and admitted his side was well and truly outplayed.

“We had a little spell in the first half but they dominated 90 per cent of the game and out-battled us,” he said. “Towards the end, it was more damage limitation and trying to keep the score down. We have to limit the amount of goals we gift teams – that’s something we have to address fully.”

The result snapped a two-game losing streak for Suburbs and they weren’t the only side looking to break out of a fruitless run. The difference for Hamilton Wanderers was that theirs included the back end of last season and stretched to a record-equalling 23 games.

They were therefore desperate to avoid creating a dubious piece of history on their trip to the big smoke to take on Waitakere United, who hadn’t tasted victory themselves for six rounds. Earlier in the season, the west Aucklanders looked right in the play-off mix but now seem out of the running after a shock 2-1 defeat put them seven points off the top four.

Papua New Guinea international Tommy Semmy put Hamilton in front mid-way through the first half but Julyan Collett – switched from central defence to an unfamiliar role up front – equalised just five minutes later. An Alex Frank winner in the second spell then finally got the winless monkey off Wanderers’ back.

Waitakere coach Chris Milicich moved Collett forward in an attempt to shake things up at the attacking end and, while he got on the scoresheet, the issue wasn’t quite resolved.

“Once again, we’ve been bitten by the fact we just haven’t scored enough,” Milicich said. “It doesn’t matter how much you dominate games or how many chances you create, if you don’t score then you’re always at risk of a counter and we got done in the second half when we were pushing to win the game. All we can do is play as well as we can for the last four games – it would be fair to say the play-offs are now beyond us.”

A delighted Ricki Herbert felt an improved defensive showing was at the heart of Hamilton finally securing three points.

“There was a little bit riding on the line in terms of that record but we wanted to stay focused on where we’re heading,” he said. “I thought we were good value for the win and had other opportunities that we probably should have taken. It went right down to the wire and we had to dig deep to get something that was pretty valuable. It’s a good win against a very big club.”

It was the same 2-1 scoreline in Christchurch in another match-up that had significant ramifications in the race for the top four. To keep their faint hopes alive, Southern United needed to take maximum reward from the South Island derby but it was Canterbury who kept themselves in pole position to secure fourth spot with a hard-fought victory.

The hosts took the lead just past the 20-minute mark when Cory Mitchell fired them in front but Southern forced their way back into the contest with a Danny Furlong penalty just before the break. It looked like the points would be shared as there was no further scoring until only five minutes were left on the clock, when another penalty settled the game as Canterbury captain Gary Ogilvie slotted home.

“I thought we were the better team and deserved to win – we created more and had more ball possession,” said Canterbury coach Willy Gerdsen. “We’re approaching one game after the other, we can’t influence the other results and will make our own luck.”

Southern counterpart Paul O’Reilly felt the first goal was vital in the eventual outcome of the encounter.

“We went 1-0 behind and, really, we needed to go ahead in the game because we’re pretty solid defensively,” he said. “If we had nicked one of our earlier chances then I think we could have made it very difficult. Canterbury probably edged it in terms of quality of football but I also thought we cut them open a few times and had a few chances we’re disappointed we didn’t take.”

In the day’s late kick-off, neither Auckland City nor Team Wellington were able to take a sizeable stride towards the minor premiership title after fighting out a scoreless stalemate at Kiwitea Street. In a fiercely but fairly contested clash, clear-cut chances proved hard to come by but it was an enthralling watch nonetheless as the top two sides in the country refused to give an inch.

Solomon Islands star Micah Lea’alafa had the ball in the net twice late on for Auckland City but both efforts were ruled out for offside as the teams had to settle for a share of the spoils. The result means Auckland maintain their one-point lead over defending champions Wellington while Eastern Suburbs are two points off the top in third.