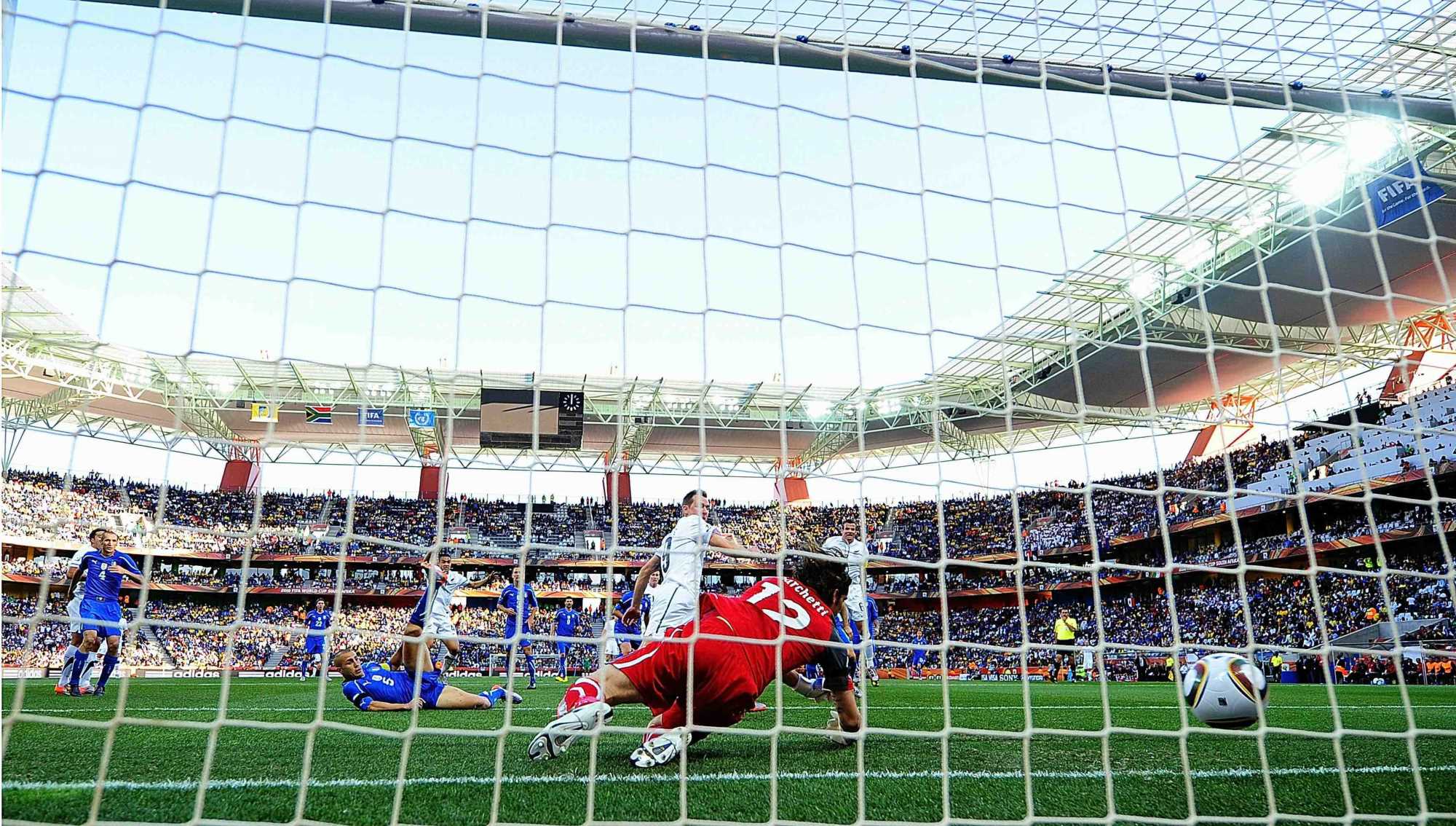 Written by Michael Burgess and supported by the NZ Football Foundation

“It was pretty amazing, on a stage like that. We had done something nobody else thought was possible.” – Ryan Nelsen

Ryan Nelsen was exhausted. The All Whites’ captain had just played one of the toughest games of his career, involved in a gritty rear-guard action for much of the second half, when time seemed to stand still.

He was slumped back in the dressing room, reflecting with teammates, when an official burst into the room.

“He said to us – ‘you have to go back out there, there are still thousands of fans in the stadium’,” recalls Nelsen. “They all look at me, because I was generally the guy that said, ‘No we have to think about ice baths, or this and that, in those situations.”

“But it was one of those moments in time - stuff it. The Prime Minister is in the bloody locker room; let’s enjoy this moment because virtually all of us might not have this again.”

The All Whites wandered back out onto the turf at the Mbombela Stadium in Nelspruit, to share the joy with jubilant Kiwi fans, who were dancing, singing and celebrating in the grandstand.

And who could blame them, having witnessed the most stunning result in New Zealand football history, as the All Whites held the world champions Italy to a 1-1 draw at the 2010 FIFA World Cup.

“It was pretty amazing, on a stage like that,” says Nelsen. “We had done something nobody else thought was possible.”

“There was that boyhood thing in the tunnel - looking to the left and seeing those guys,” - Ivan Vicelich 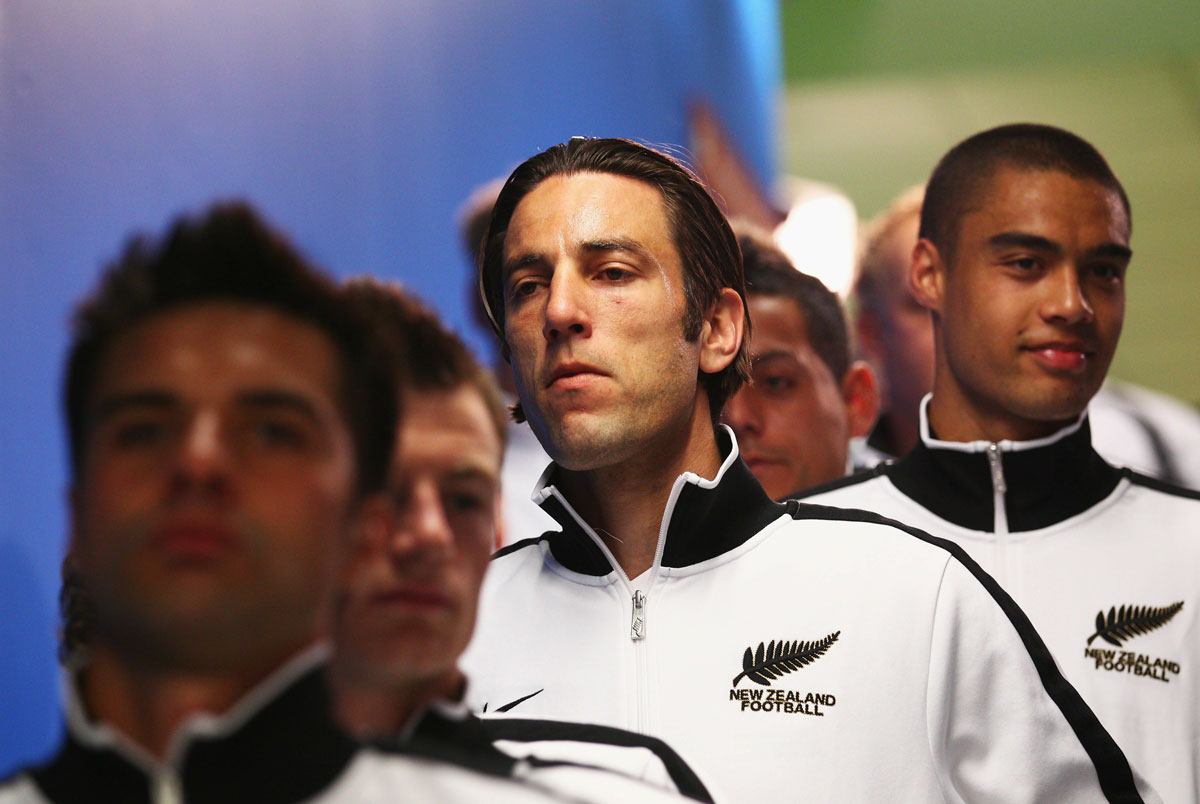 Four days earlier, New Zealand made their tournament bow at the Royal Bafokeng Stadium in Rustenburg.

Three decades on from their last appearance at FIFA’s global showpiece (1982) the All Whites were determined to make a mark.

They did, though left it late, with Winston Reid’s 93rd minute header securing a 1-1 draw against Slovakia, after Shane Smeltz conjured the perfect cross.

That put the team in an ideal state of mind ahead of the Azzurri clash, though they were still prohibitive underdogs.

Italy was a footballing powerhouse; Four-time World Cup winners, with more than 3,500 professional players to draw from, compared with New Zealand’s 25.

They had Serie A legends, including Fabio Cannavaro, Andrea Pirlo and Gianluigi Buffon, in a squad worth around $330 million.

It was a daunting prospect, though New Zealand had taken confidence from a friendly match ahead of the 2009 Confederations Cup, where they had led Italy  three times, eventually losing 4-3.

“At the end of the day it is football and you are facing 11 people,” says Paston.

“Yes, they are good players but Ryan [Nelsen] had made a point of saying, ‘Look, let’s not take a backward step to these guys’.”

However, it was still a surreal moment before the match, lining up and looking across to see the famous blue strip, with veteran Ivan Vicelich admitting his mind wandered.

“There was that boyhood thing in the tunnel - looking to the left and seeing those guys,” says Vicelich. “Not only excitement but also admiration; to be playing against the best, that’s what you want. The dream of being at a World Cup and playing a nation as great as Italy.”

Striker Smeltz was far from overawed.

“From the outside people would think, New Zealand playing Italy, they can’t be too confident here,” says Smeltz. “But within the group, it was like; ‘This is what we have been waiting for all of our careers, this is the moment you dreamed of as a boy, here it is’.” 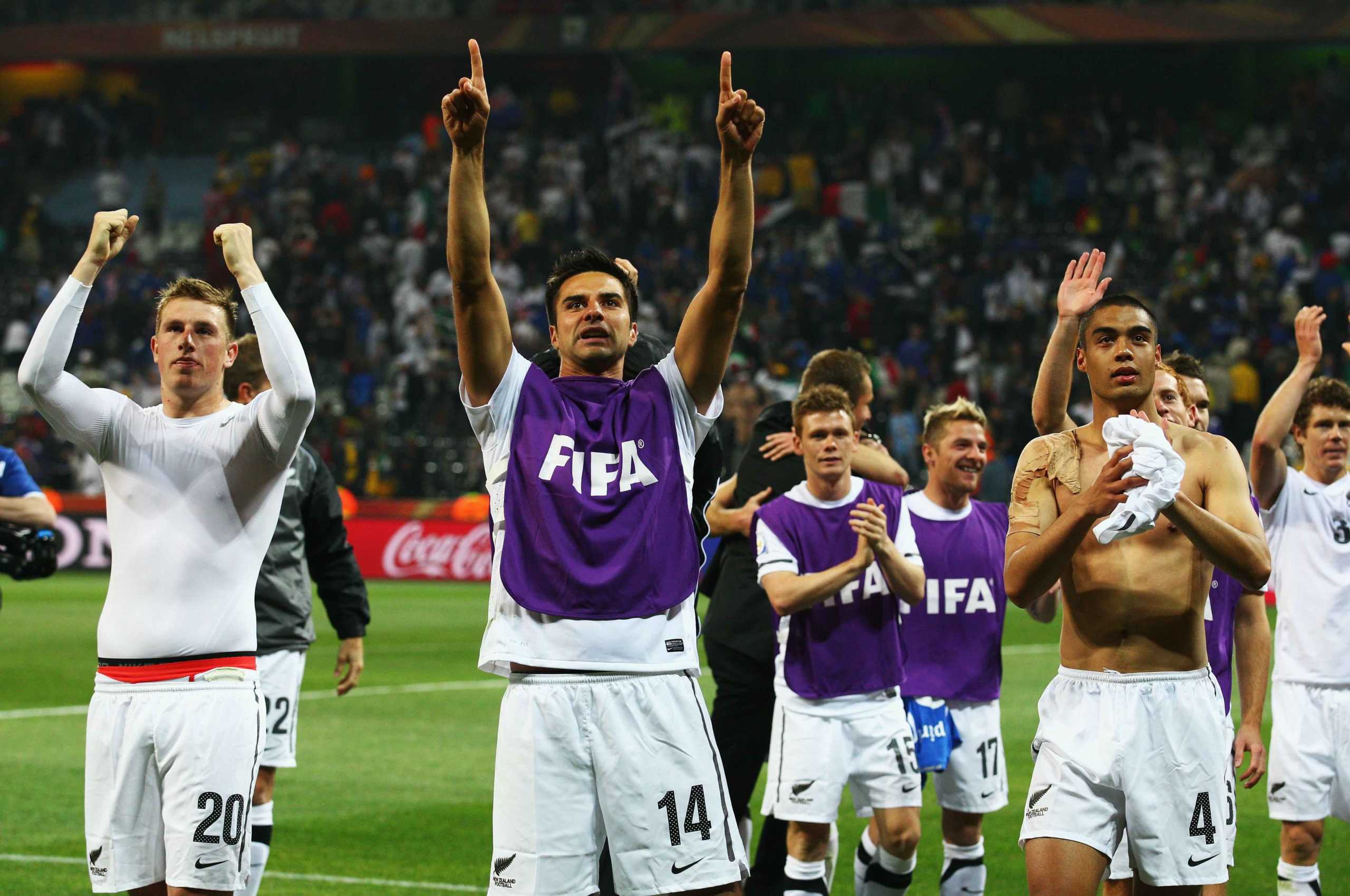 At 4pm (local time) Guatemalan referee Carlos Batre blew his whistle to commence proceedings, with the All Whites quickly settling into their shape.

It was 2am in New Zealand, but large crowds had gathered in pubs, bars and football clubs, encouraged by the performance against Slovakia.

Those bleary eyed fans were in disbelief minutes later, as the All Whites made a dream start.

New Zealand won a free kick ten yards inside the Italian half and sent their bigger players forward.

“I remember thinking, this ball is going into the box,” says Smeltz. “I was starting in the middle of the pack. We had some big boys. I’m just over six foot, and I was the smallest among the frontline, plus we had Winston [Reid] and Ryan [Nelsen].”

Simon Elliott, who arrived at the World Cup without a club, sent an arcing ball into the middle of the penalty area.

Smeltz made an instinctive run off the shoulder of his marker Fabio Cannavaro, before seeing the ball bounce awkwardly off the Italian’s thigh, after being flicked on by Reid.

“I just had to lunge myself at it and poke it home,” says Smeltz, who placed it neatly past goalkeeper Federico Marchetti.

“It was a simple finish in the end. But to be 1-0 up after 7 minutes, against Italy; this is cloud nine stuff.” 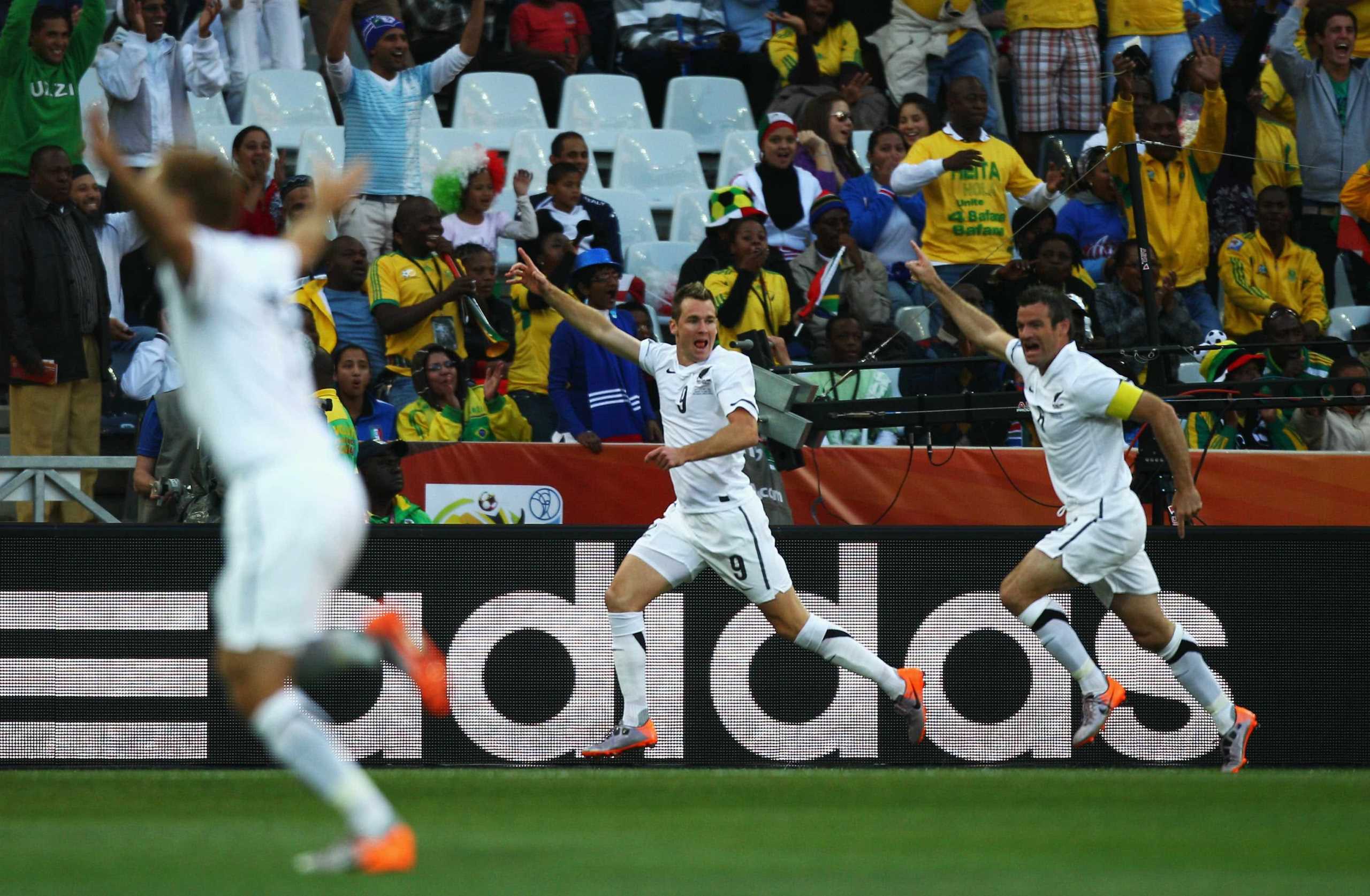 Herbert was thrilled for Smeltz, a key player during his tenure.

“He always had the knack of being in the right place,” says Herbert. “It was a great delivery from Simon Elliott, then Smeltzy’s ability to read things and get in behind.”

Marcello Lippi, standing a few metres away from Herbert in the Italian technical area, was shocked, as the world’s fifth ranked team trailed New Zealand (No. 78).

But Italy were quick to respond.

A well struck Riccardo Montolivo free kick had Paston at full stretch moments later, before Giorgio Chiellini sent a volley high and wide from an corner.

Pressure was building, with Montolivo prominent, the Fiorentina midfielder connecting well with a 30 metre shot that sailed just over the bar.

But the All Whites were holding firm. Nelsen was marshalling the troops superbly, Reid and Tommy Smith were shutting down any threats and Vicelich and Elliott worked tirelessly in front of them.

“To get such a great start but then retain our composure was impressive,” says Herbert.

The All Whites rode their luck – with Montolivio hitting the post with a 25 metre angled drive - but were weathering the storm, compact and connected defensively and growing in confidence.

But the momentum changed in the 28th minute, with Daniele De Rossi winning a penalty after an extravagant dive. There had been a slight shirt tug by Smith, as both players pursued a cross, but it was a debatable call.

Vincenzo Iaquinta converted neatly, and after the early shock, the Italians were now expected to slip into gear, though New Zealand had other ideas.

They continued to chase, harry and pressure and Italy had only one further opportunity in the first half, with a long range De Rossi hit drawing a strong stop from Paston.

There was a flashpoint as the teams wandered off at the break, with All Whites substitute Ben Sigmund confronting De Rossi over his cynical dive.

“I was right there and went over to De Rossi, because he reacted as well,” says Vicelich. “I told him to take it easy. It was a soft penalty; of course we were upset with it.”

“Look at Mark Paston – that was the game of his life, he was phenomenal.” - Nelsen

Nelsen was thrilled with the first half, cognisant that Italy had been knocked off their stride.

“Instead of trying to out play us, they started some silly stuff, a lot of theatrics, putting huge amounts of pressure on the referee,” says Nelsen. “It fired us up a bit more.”

But the All Whites were still braced for an onslaught, with Lippi sending on skilful Juventus midfielder Mauro Camoranesi and prolific Udinese striker Antonio Di Natale for the second half.

Di Natale immediately drew a good save from Paston, before Iaquinta dragged an effort wide from the edge of the area.

Italy were monopolising possession, but the All Whites matched them stride for stride.

“We grew into the game,” says Vicelich. “It was a lot of hard work, a lot of kilometres but I don’t recall the feeling of not being in the match.”

Behind him Paston, who had been so cursed with injuries over the years, was in career best form.

“I was feeling great,” says Paston. “It’s what you strive for as a player. I knew I had done the work and had enough build up games to get my eye in.”

The All Whites were holding the Europeans at bay, before coming close to a dramatic goal in the 63rd minute. A New Zealand attacking throw was only half cleared, to the feet of Vicelich, who hit a savage shot on the half volley from outside the area.

“It was so close,” says Vicelich. “If it goes in, it goes in; that’s in the hands of the gods at that stage but it is one of those ones that you watch and think, ‘Oh wow, that would have been something if it had of gone in’.”

Italy pressed again, with Paston at full stretch to turn away a brilliant effort by Montolivio.

“Mark flew under the radar big time but he was an absolute standout at that World Cup,” says Herbert.

The pressure intensified in the last 10 minutes, unbearable tension for those watching on. But the All Whites stayed focussed and had a chance to steal the game, when substitute Chris Wood did superbly to beat Cannavaro, before flashing his left foot shot just wide of the far post.

There were numerous heroic defensive efforts, epitomised by Nelsen’s close range body block to stop a shot headed for goal, while Paston tipped another long range effort past the post.

“The quality of a player like Ryan, the leadership, determination, putting his heart on the line, that was paramount,” says Herbert.

Italy forced 15 corners and threw everything at the All Whites, though they were often restricted to shots from distance or hopeful crosses and a final blast of Batre’s whistle sealed an unforgettable result.

“When people associate New Zealand and Italy, they sort of remember the name and the goal. It’s amazing how people have some sort of reflection on it.” – Shane Smeltz

Prime Minister John Key joined the celebrations in the dressing room, while shirt waving fans hugged in the grandstands, delirious at the outcome.

Nelsen felt the All Whites, individually and collectively, had stepped up when it mattered most.

“Look at Mark Paston – that was the game of his life, he was phenomenal,” says Nelsen. “But I don’t think anyone didn’t play well. Most people played above their capabilities, which you have to.”

Herbert remains amazed at the conviction and courage.

“They did it to their ultimate level, every single minute of the game,” says Herbert. “Any mistakes we made, there tended to be someone there to recover and help.”

According to Vicelich, that All Whites group had formed a remarkable bond.

“The spirit in that team had grown over many years,” says Vicelich. “From tours away, playing against tough opposition, having to prove you are a good team, getting bad results, getting good results, that’s how you grow, that’s the way to make a good culture.”

More than a decade on, Smeltz, who has lost count of the number of times he has ended up discussing his famous goal, especially in Italian restaurants.

“To be honest I don’t bring it up but someone else that I am with might,” says Smeltz. “It’s funny how random people have flashbacks of that. Even if you are not a big football fan, you couldn’t help notice that moment.”

“When people associate New Zealand and Italy, they sort of remember the name and the goal. It’s amazing how people have some sort of reflection on it.”